June is upon us

June always sneaks up on us and then….Boom! It’s June all of a sudden. This year was no different. We worked most of May on Maleah’s graduation so June was here before we ever realized it. Once June is here though we love all the outside activities and water fun to cool off.  Well, let the good times roll!

This year June came in blazing hot. Record setting hot temperatures made it a bit difficult to get a lot done in the heat of the day but we managed to get a few things done before we jumped in the pool every afternoon.  At least, most days we got a little work done…. Hey, we tried! But it was HOT!!

Sadly, Little Jethro Flash decided he needed some extra snuggle time or something. He tore his cruciate ligament of all things. To prevent a very expensive surgery, we had to keep him in his crate almost 24/7 for a few weeks. He was not the happiest of puppies but his leg did heal and then I was happy we didn’t have to fork over an obscene amount of money for surgery. Of course, he had to get hurt the week that Jim was working out of town so everything was a little crazy. That’s just the way it always works, isn’t it?  Yep.  Always.

Jim landed a huge job almost 2.5 hours away from home. The job was a really well paying job that would take him almost 4 days to complete so it just made sense for him to get a hotel and stay up there. The kids missed Jim like crazy so we did a little work and had a little fun everyday to keep their minds off of missing him.  And yes, I missed him like crazy too!

One of the projects that we completed in June was a new mobile chicken coop for all the new chicks we had that needed a bigger home. The idea was to put all 21 chicks in here together and put up a portable electric fence that would allow us to move them to fresh grass every few days.  Let me just say that this has worked out better than I could have ever imagined!

The barn was completed in May and we finished leveling up the inside and added sand as a top layer. I’m not a huge fan of concrete in barns so I opted for a dirt and sand floor. Jim thinks I’m crazy but…Hey, it’s who I am! I won’t go into my reasoning for not liking concrete in a horse barn because Jim says I get carried away. So, I won’t get started.  But I am loving my barn regardless!

Thankfully, we had gutters installed on the barn just before the heavy rains came. Hmmm, I just realized I don’t have a picture of the barn with the gutters. Oh, well. If you’ve seen one gutter you’ve seen them all, I guess.

So, I mentioned that we tried to get work done in June. Jim actually took 2 weeks off work to get things done around the farm. The first week was spent working on the tack room mostly, so the kids and I worked on the fields and other chores.

I absolutely love having the kids with me, helping me, exploring and learning stuff with them.   They kinda keep me together and keep me being me.  Love them!

I also love being able to turn around after working in the fields on a hot, humid morning and having the pride and satisfaction of knowing that we have done this as a family.  We have taken this wooded property and turned it into these beautiful pastures!  And we aren’t done yet! 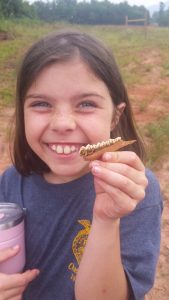 Maylin loves to help but she also loves to explore.  She always finds the neatest things for us to learn about!

My girls are almost always beside me learning to put up and repair fencing.  I say “repair” because we have some very lazy deer who haven’t figured out how to jump over the fence yet.  They seem to want to go through the fence.  Those crazy deer need some jumping lessons! 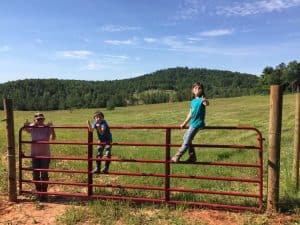 This was the last of the perimeter fence for now.  The last gate!  Now we have almost 40 acres fenced in and divided into 5 pastures.  The kids and I were so excited!  Now we can start looking for cows while we finish the strand of electric.  Whoo-hoo!!! 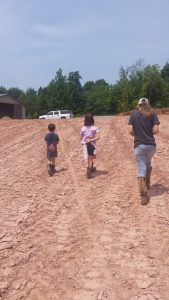 I love, love, love these kids more than they will ever know!  Sometimes I just hang back and watch them together and pray that I never these moments.

Maleah has been wanting turkeys for so long now.  So she saved her money and went for it.  First, we tried to order turkey poults from the feed store but that didn’t go so well.  They kept putting us off.  For 4 months!  That kinda exhausted my patience so we bought a new incubator specifically for turkey eggs and ordered a dozen heritage breed turkey eggs through the mail.  Turkey eggs are quite delicate and hard to hatch so we hoped for at least a 50% hatch rate after shipping through the mail.  Well…..

The shipment of eggs had some problems finding their way to us.  They arrived a day late and then we struggled with the thermometers and humidity in the new incubator.  Great, just great.   Two days after the eggs arrived we noticed the egg turner was no longer working.  What???  We removed it and ran to the store to replace it.  Less than 2 days later the same thing happened again so I called the manufacturer.  That was a frustrating phone call to say the least.  Even though the box said turkey eggs they don’t recommend it for turkey eggs due to the larger size of the turkey eggs.  But it says turkey eggs on the box!  Nope, not their problem.  So, it became my problem and Maleah and I had to commit to turning turkey eggs every 4-6 hours for 28 days.  How fun.  (That was definitely sarcasm!)

The end of June is always exciting for Maleah.  It’s her birthday, of course!  We try to let the kids where they want to go and do on their birthdays.  Maleah chose the Greenville Zoo so off we went.