September is Swell?  Did I really just write that as a title?  That sounds so weird because that is not something that I would normally say out loud.  Swell?  Who uses the word swell?  Well, apparently I do now….at least on paper.  So does that give me more character for using unusual words?? Or does that just make me more weird?  Yeah.  I already know the answer. 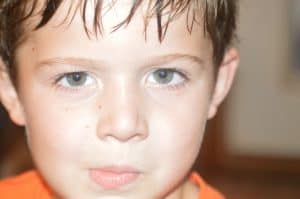 This is the look I get from Camden when my jokes go a little too far.  I don’t think it’s really a punishment to see this cute little face though!

September started out great with the kids super excited about school and learning new things.  Great!  That was all just fine and dandy.  Except all my morning routines had to be tweeked, to say the least.  Normally, my mornings consist of getting up early, feeding animals, doing chores and then jogging (or walking since I broke my big toe a few weeks ago.  Some mornings I even break out the weedeater at 7am just to beat the heat.  Then I head to the house, shower, fix breakfast and get Jim and the kiddos started on their day. 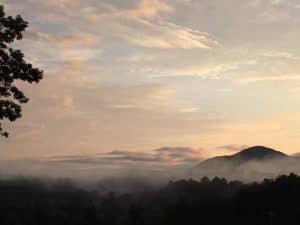 Well, all that had to change now that school starts at 7:25.  Yes, I did say 7:25 AM!  I’m a morning person so I’m already well started on my day by 7 am but Jim and Maleah are not early risers.  Maylin and Camden typically get up with the sun unless they are really tired but they do enjoy a lazy morning. Normally, the kids go to speech therapy a few days a week at 8:30 so I thought we had could get a handle on the school routine fairly easily.  And they really did well at adjusting.  It was my routine that fell apart! 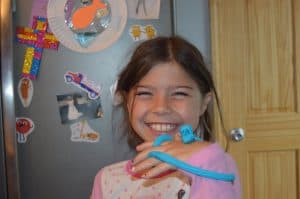 How can I complain about my morning routine when I get to wake up to this girls sweet giggles and silly Play-dough snakes every morning?

I had to leave the house at 7 am to get the kids to school and then rush back to feed the hungry, demanding animals and then get Maleah to therapy or delivering her eggs.  That was the easy part though.  Giving up my morning jog has been the hardest.  Somehow, I’m going to have to find a way to fit that back into my routine.  My sanity and the health and well being of everyone around me really depends on it.

In spite of all the early mornings I still somehow managed to stay up late at night also.  And after a lot of late nights and hands that will forever remain covered in polyurethane, the stalls finally got all prettied up, protected with poly, put together and put up.  Whoo-hoo! 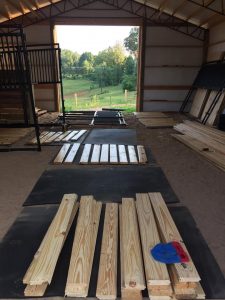 Silly me started cutting all the boards with a handsaw.  Yes, a handsaw.  Some silly person (ME, of course) actually cut through the cord of our Skill Saw the last time she used it.  I was then banned from using power tools for a period of time.  Since Jim wouldn’t let me use a power saw, I didn’t see the need to buy another one.  Until now.  Now, I need one.  The process of cutting each 12 foot board three different times with a hand saw that is getting duller by the minute is absurd!!  ABSURD, I say!  Jim, can I please use power tools again????? 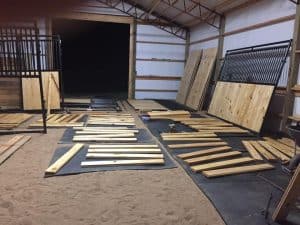 This was after Jim caved and let me not only buy a circular power saw- He actually let me use it too!!!  The boards were all cut in a bout 5 minutes.  No joke! 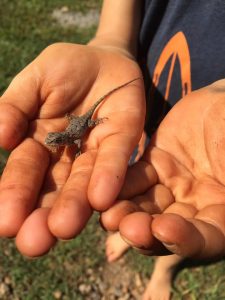 This is just a random photo of one of Camden’s little critters that he found at the barn.  He loves all the toads and lizards. 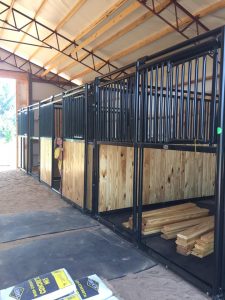 Okay, after all the boards were cut and stained with polyurethane we had to put them in the stalls.  Then the fun part was flipping the partially finished stall walls to fit the boards into the sliding doors.  Whew.  I’m so glad my husband is strong! 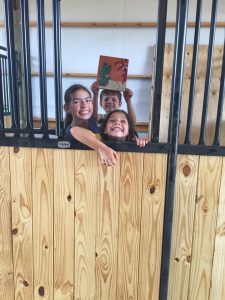 Once we finished the first stall I put the kids in and closed the door.  It was kinda funny because they didn’t know how to open the door from the inside.  I did eventually let them out….eventually. 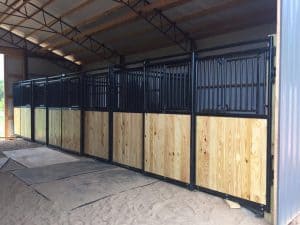 Ta-da!  The stalls are now completed in the front.  I just have to finish the back walls with some 1 inch plywood and we are good to go buffalo.  Now, I need more horses please.  By my calculations I can fit a lot more horses on this farm.  Let’s just say that a girl can never have too many horses. 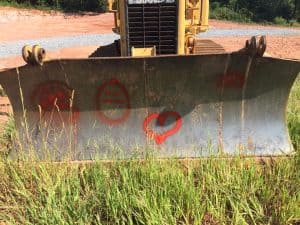 While we finished the last of the work on the stalls, we also had a little fun with Jim.  He takes jokes really well, thankfully.  We had bought the wrong color of paint and we hated to see it go to waste.  So, the kids spray painted the blade of Jim’s dozer!  Only the blade though!  I made sure they didn’t paint the body at all.  The paint will wear off the blade fairly quickly when he starts clearing in the woods again this fall.  At least, I hope it does!  If not, I will be scrapping the paint off by hand and apologizing profusely, I’m sure. 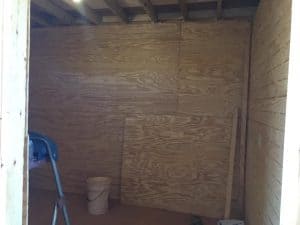 After we all laughed about the newly painted and graffitied dozer, we moved on to the walls in the tack room.  Ta-dah! The inside of the tack room is done, except for painting the floor and putting a protective coat of polyurethane on the walls.  We just need the outside walls of the tack room and a door and I can move all my horse goodies down here!

Back in July we had ordered a cattle shute because we thought we were getting 2 more cows.  Two beautiful black baldie cows to be exact. Well, the farmer didn’t quite hold onto them like he promised until that weekend.  He said he didn’t need a deposit.  Just call and come get them that weekend.  When we called 2 days later to confirm our time for the next morning he told us he had already sold the cows.  Ummmm… okay??? Apparently those cows weren’t meant for us.

So, we moved on to a lovely Jersey/Angus cross that we saw listed for sale.  We thought she would make a lovely friend for Minnie.  We even named her Clarabelle after meeting her.

We agreed to buy her and paid a deposit.  Things didn’t quite work out though.  The short version is that the guy kept changing his mind on when and where we could come get the cow.  We were patient for several weeks and then he called one afternoon and demanded we come get her that day.  It was an impossible situation with a short tempered person.  Jim calmly told him to keep the deposit and the cow and bid him Good Day.  I was a little more frustrated than Jim over the situation but we were both tired of dealing with the man and his constantly changing schedule, so we moved on.

And just like that another cow just lost their way to our farm.  I am not liking this pattern at all, are you? 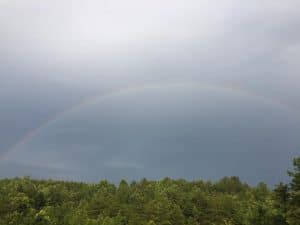 We might not have gotten the new cow but at least we had a little rain that brought about this beautiful rainbow. 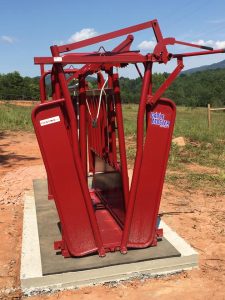 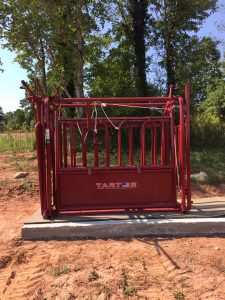 We have bolted the shute to the concrete and now we need an alley way set up to guide the cattle into the shute and we will be all set up for the next cow.  I hope…

Enter the next cow…

We came across an ad for a sweet little 7 month old Red Angus/Hereford heifer.  She was beautiful! 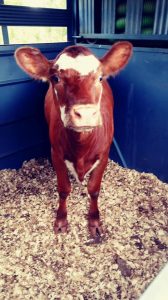 Meet our newest cow.  And Jim’s newest love.  Jim went to see her and bought her on the spot. Have I mentioned that Jim has been bitten by the cattle bug? He is almost as excited as I am about cattle lately. Loving it! 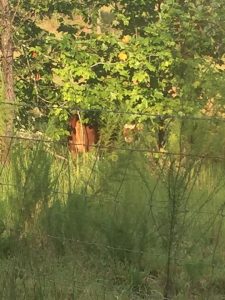 A few days later we brought home this sweetie-pie. She is an expert at hiding in the woods.  Can you see her little face in the trees? 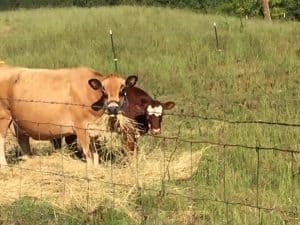 Daisy fell in love with the new little heifer immediately.  Daisy acts like her Momma.  It’s so sweet.  Now, we just needed a name for the new cow.  We thought Camden might like Mothra (from Godzilla) since she has an unusual pattern on her forehead.  Nope, he didn’t like it.  He wanted to call her Bat-Man, which I was okay with.  Why not?  Jim strongly disagreed.  We thought about Lil’ Red but she is going to be a BIG cow one day.  So we finally settled on Rosie.  Sweet little Rosie.  After naming Rosie we decided that we might want to try naming all the females that we plan to keep a flower name.  Wouldn’t that be cute?  Petunia, Daffidoil, Lilac, Buttercup, Lily, Iris, Clover-the list could go on forever.

Even though I was dreaming about flower names for future cows, I continued to take online classes through Penn State Agricultural program and SARE.  Most of the classes were basically easy stuff but I still enjoyed them.  We even begin researching some farm grants that might be available to us.  That’s a whole new territory!  We checked with the Ag. Extension Agent and even attended a few webinars to learn more about the ins and outs of grant programs we are eligible for.  We aren’t eligible for most of the grants yet, because this is really our first year of running the farm with any income at all.  Next fall, I think we will have a much better shot at a few options.  I think by next year we will have a much clearer idea of the direction we would like to take the farm and the areas that we want to focus on.  Right now we have so many ideas and possibilities that it’s hard to narrow it down and focus.  Story of my life- I want to do it ALL!!!  NOW!!!

By next year, we hope to have our Farm ID and be considered an official farm.  Oh wait!  We already are an officially recognized farm! 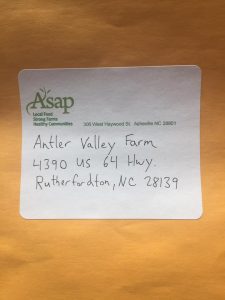 This came in the mail one day and I was over the moon excited!  We have mail addressed to our little farm!  Yep, it’s the little things in life that make me the happiest. 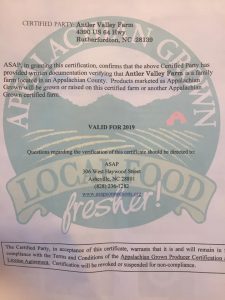 We had applied and were awarded our Appalachian Grown certification through ASAP!  Whoo-hoo!! This is such a great organization that we look forward to working with in the future. 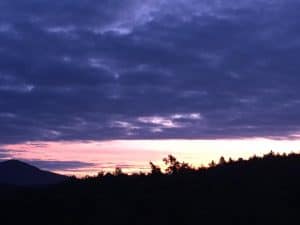 So, that pretty much wraps up our swell September story.  HA-HA!  Sorry, I couldn’t resist just one more time!